Steel fibres for micro-reinforcement of concrete

Yes, you have read it correctly. Due to the related technologies Niko has also made its way into the world of construction industry. Steel fibres have been largely used in the world for quite a long time now and are replacing classic concrete reinforcements.
Steel fibres are useful where it is built on a preliminary hardened foundation. These are industrial floors, screeds and various concrete products, e.g. pipes, edging stones, etc. Steel fibres can also be used for producing shafts, reinforcements of front door jambs, where mechanical damages are likely to occur, and the like.

Steel fibres are mixed into concrete and are evenly distributed in such a way that they are present three dimensionally in built-in concrete – in the whole mass. The fibres consist of a wire from 0.6 to 1.0 mm in diameter and are from 30 to 60 mm long. Therefore, there are up to 400,000 fibres in a volume of 1 m³ at an average dosage of 20 kg.

And what is the function of steel fibres? 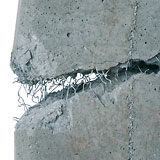 Steel fibres are made of a steel wire the tensile strength of which is over 1000 N/mm². There are specially formed anchors on both ends that prevent the fibre from being pulled out of concrete. Niko has carefully made these two anchors as it is aware of their importance. When steel fibres are added into concrete, they are distributed in the whole mass and also remain this way in hardened concrete. It is known that cracks appear in every concrete when it is drying and at that point steel fibres begin to play their role. As they are distributed in the whole mass, they hold the whole mass together and with minimally lesser force than the fracture of concrete. Thus no cracks can be seen after industrial floors and screeds are made; if in case of load cracks do appear, there is no reason for fear that the floor would crumble.

Quantity of concrete fibres in concret 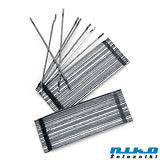 The calculation that is the basis to determine the quantity of steel fibres tells us how many fibres of particular type we have to put into concrete. In order to make a good calculation we have to know, how the basis on which we concrete is made, the type of concrete, static and dynamic loads – means of transport, the thickness of a slab, temperature differences and dilatation.
20 kg is the basis to determine the quantity easily and we deviate from this quantity regarding the complexity of the construction we would like to build. The thickness of the concrete slab has a large influence. We have to be careful with thin slabs as the need for fibres increases much. We suggest that you contact one of the contact persons below.

Choice of fibre type and lengt 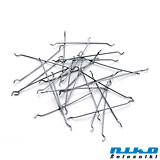 We offer fibres that have diameter from 0.6 to 1.0 and are from 30 to 60 mm long. The quality is ensured by a thin long fibre, but there are certain restrictions that have to be taken into consideration. The principle is to use fibres which are three times shorter than the thickness of the floor. If we want to make a 20 centimetre thick floor, a 60-milimeter fibre that is 1.0 or 1.05 mm thick is appropriate. If we would like to make a 5-centimeter screed, we should use a 15- to 20-milimeter fibre, but as this fibre has very poor supporting performances, we should choose a 30- to 35-milimeter fibre which is 0.7 or 0.9 millimetre thick. We have to take into account that fibres lose their performances of holding force. In 15-milimeter fibres the horizontal distance between the anchors is only 5 mm.
We can also choose among steel fibres bonded into sheaves and loose ones. The advantage of bonded fibres is the quality of dosaging into a concrete mass. Bonded steel fibres dissolve slowly (approximately in 2 minutes) in concrete and do not make lumps due to a water-soluble glue.

Loose fibres have to be added slowly in order to avoid the formation of lumps. Therefore feeders are available.